One of the most asked questions by most of our readers is which one is the most ideal and best cooktop to buy? Is it the Induction stove? Electric cooktop or an old fashioned Gas Stove? Today we are going to look at each individual type of cooktop, see why they are good and what are they lacking in comparison with others.

Different Types of Cooktops and their pros vs cons:

There is no separate establishment that out of all the fancy types, only the Gas, Electric and Induction are mainstream. Let us start with Gas stoves

A very common occurrence in almost every Indian household, Gas stoves are also the most preferred types of stoves by many professional chefs and normal home-makers alike. This is because Gas stoves offer greater flexibility when it comes to cooking atmosphere. That and the availability of a wider range makes these the best bet.

Firstly, for a gas stove, you will be having a great amount of control over the heat that is to be distributed across your utensils. The ease of adjustment of heat and the cleaning of course along with the fact that these have longevity make Gas stoves preferable.

But at the same time, please do not ignore that Gas Stoves could be an expensive affair. Their fancy styles and designs do not come cheap and also there is the issue of energy expenditure. Natural gas itself is growing in cost and reducing availability. There are also the risks of gas leaks and explosions (though less likely to happen with the modern-day safety standards)

A lot of us do not know this but Electric Stoves have been a thing for more than 120 years. With the simple premise of using electricity to generate heat to cook instead of gas, they have been serving as a brilliant alternative to gas stoves.

Electric cooktops are attractive in an aesthetical fashion. They are very handy and portable as you can take them out, plugin, cook and store it away, an option that is not exactly possible with a gas stove. Also, there are no restrictions or burner guards required for these stoves. Perfectly portable, these stoves make great companions for people living in small areas.

They do not possess the risk of catching fire or being inflammable. Also, there is the fact that they are super easy to clean and maintain. You can place your pans and other utensils comfortably on their flat surfaces without the concern of them tripping. But they sure lack in the flexibility of heat control.

They do have heat control buttons but that does not give you as flexibility as a gas stove. There is also the issue of not working during power cuts (for which India is notorious).

Out of all the stoves, an Induction cooktop is the fastest and most energy-efficient of all. Did you know that a few induction stoves have the capability of boiling a large bowl of water in under 90 seconds?

What’s more interesting and fascinating about an induction cooktop is that it does not heat the entire stove. It just heats the utensil that needs to be heated up. This implies that an induction stove is not just energy economical but also contributes towards having kitchens that are free from hot atmospheres and sweating.

There is also the issue of safety. Induction stoves give you much more safety than that of gas stoves and even electric stoves because of the immense security and automative features that are embedded into the. For instance, there is the automatic shut down feature that will turn off the stove when you lift off the utensil from the stove.

But as we speak of the benefits, we cannot forget the limitations as well. For instance, similar to the electric stoves, these too have the limitation to the shape and size of the pans and pots you would be using. Also, compared to gas stoves, these stoves are expensive. But this can be overlooked when comparing overall energy savings.

Now that we have all got a brief understanding of the types of cooktops, let us compare all of them with respect to energy efficiencies: 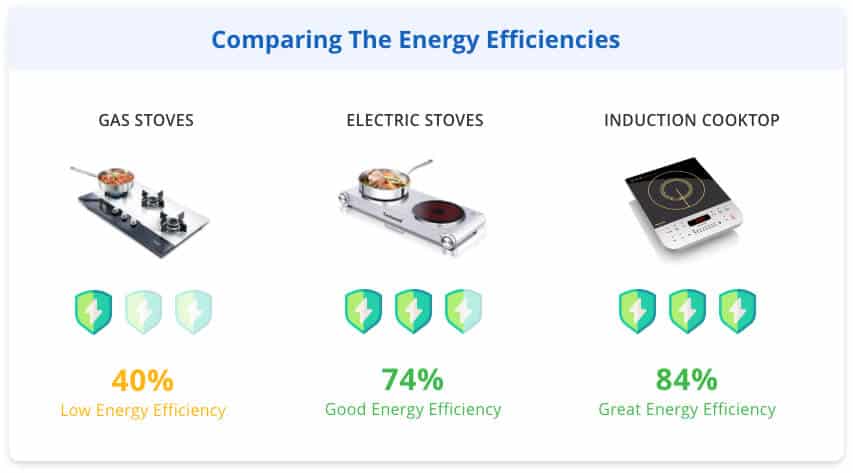 By comparison, the induction stove is the clear winner. Now you can see that the induction stove and the electric stove are very close and could have overlapped as well. This is because as the name suggests, an induction stove works on the principle of induction. This means that it does not spend energy heating up the entire base or the stove but it only spends its energy to heat up the utensils.

Comparing the Costs of the stoves:

Now we move on to compare how each of these stoves stands with respect to the costs and pricing. For the sake of comparison, we have consolidated and compared the average pricing range of products available and would only be comparing the energy expenditure of the stoves. 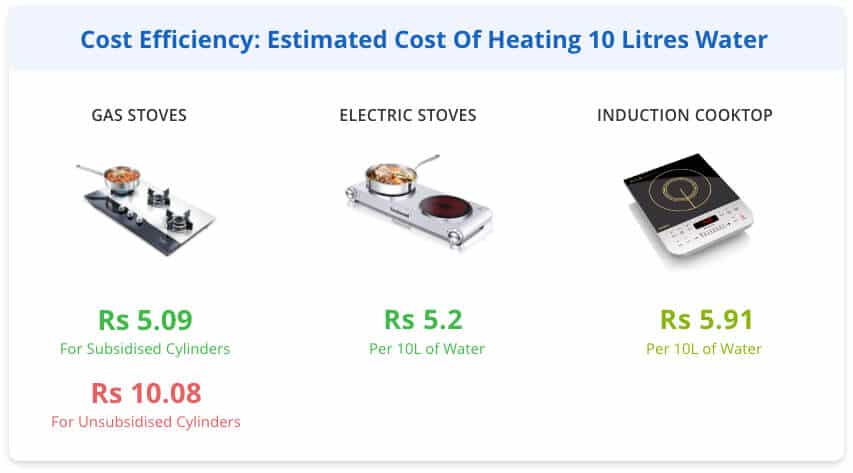 For the sake of an example, let us consider boiling 10 liters of water which is at an average temperature of 25 degrees. Now the energy required to boil it would be

With that reference, let us compare various types of stoves and how they stand for such energy expenditure.

In this round, the gas cylinder seems to win the game. But hold on, have we considered alternative energy sources like solar energy? In houses with solar panels and alternative forms of energy, you can drastically bring down these costs for even 0 rupees as well. In that case, both the electric and induction stoves win.

Your choice of energy directly impacts your costs of using a stove; be it gas, electric or induction.

Let us start with the Gas Stove:

Liquefied Petroleum Gas or LPG based gas stoves are the common norms in Indian households. However, the situation is changing fast and more affordable gas and natural form of it, the PNG (Piped Natural Gas) is slowly and gradually replacing LPG. Currently available only in a few select cities across India.

While a single cylinder of LPG costs you about 500 rupees (price fluctuates about 498 or below depending on area of distribution). The equivalent volume of (PNG) Pipelined Natural Gas would cost you somewhere between 375-400 rupees. Thus, your choice of gas can also help you reduce the price of your cooking.

By common sense, solar energy is the most sustainable and cheapest form of consumer end energy available. While GRID based electricity (generated either by coal or otherwise) distributed by corporations may be easy, it will cost your electrical appliances (induction and electric stoves) at a considerable amount.

When it comes to using solar energy, one of the biggest challenges is the initial installation. If you were to be able to invest in installing high-quality solar panels, they would not only reduce your energy expenditure of cooking but also for a whole range of other appliances as well.

The only drawback of a solar energy-based cooker is that the lack of availability of sun during monsoons or during winters. this again can be minimized if you use hybrid grids( solar and grid-based power consumption)

1. Do induction cooktops use more electricity?

Ans: No. Induction stoves need to use electricity to manipulate the magnetic property of steel and thus directly heating the cooking vessel. This makes them energy efficient and also uses less electricity than a simple electric stove.

2. Is cooking with an induction cooker/stove bad for your health?

Ans: It is true that an induction cooktop uses electromagnetic current thus it is ideal that you use magnetic cookware. There is also the fact that due to the induction nature of the cooktops, they MAY emit low-frequency radiation that is much like at the microwave frequency.
This might bring up the question of how harmful electromagnetic fields and radiation-emitting cooktops are but in reality, an induction cooktop is completely safe to use.

Ans: An electric stove is as safe as you will handle it; much like a gas stove. Electric stoves come with flat surfaces that make placing utensils on them easy. This is completely safe compared to the fire hazardous gas stoves. However, one needs to be careful while handling electricity.

4. Do electric stoves use a lot of electricity?

Ans: Generally, electric stoves can use up to 2000 to about 5000 watts of energy averaging to about 3000 watts. On average, it should not cost you more than 15 rupees per hour of usage or lesser depending on the efficiency of the stove you choose.

When it comes to cutting costs in the long term, ease of use, congestion in the cooking area; by default the induction stove (and even the electric stove) are the clear winners. But if you are someone who wishes to have more flexibility for your cooking, the heat used and to use any type of utensil you wish like without any limitation, then the Gas Stove is your go.

While that was our comparison, let us know if we missed out on anything or forgot to review any other important points. If you have any further questions or queries regarding which stove to use, please write to us in the comments section. Also, we have compiled some great buying guides and lists for the Best gas stoves, Best electric stoves and also Best induction cooktops in India. Do check them out to pick the best.