QLED Vs OLED Vs LED: Which One is The Best?

If you are purchasing a new smart TV, then the most important aspect to check out is screen type. Most of the popular televisions have either one of three screen types – QLED, OLED or LED.

QLED or OLED or LED – Which screen type is better? This is the most common question we come across while purchasing a new smart TV.

In this article, let’s take analyse these different technologies in-depth like how they are different from each other, their benefits and drawbacks. This information will help you choose the right TV suitable for your viewing preferences and budget.

LED represents Light Emitting Diode. They are same as traditional LCD panels but are backlit using LEDs. Usually, LCD panels have pixels – tony coloured dots are cover the TV’s screen. But as pixels are not visible, LEDs are used as backlight. So, when LED word is referred, it represents LCD screen with LED backlit. Not every LED TVs is same as the other. They can vary in terms of quality and number of LEDs used. These factors account for several differences like black levels and brightness.

The term QLED is a buzz created by Samsung for describing their latest LED TVs. Similar to general LED, they are use traditional LCD panel and backlit using LEDs. However, in the QLEDs, a filter is arranged between LED layer and backlight. This filter contains energy reactive nano-particles that filter light generated by saturated and pure colours.

OLED represents – Organic Light-Emitting Diode. This screen technology is capable of producing both colour and light from a single diode when you provide electricity. Due to this feature, they don’t need an additional backlight option. Each pixel is an individual with self-contained source of both light and colour.

Some of the major benefits of OLED screens – they are very thin, flexible and you can even roll them easily. When you compare it with LED TVs, then the biggest advantage is that – every individual pixel has its own luminance and power. Whereas LED screens have persistent pixels that need additional backlight feature for visibility. When the backlight is on, then you can see it and when the backlight is off, then no light will emit and it will be completely black.

In the present market, LG brand is providing high quality OLED panels for their TVs. Some Sony models also come with OLED screens that the OLED panels are provided to Sony by LG brand. You cannot find this screen technology with any other brand in the market.

LED Vs OLED Vs QLED – Which One is Worthy to Invest?

Now, let’s compare these three technologies in terms of contrast, brightness, viewing angle and other technical and performance specifications. We have provided a table below representing the same comparison for easy reference. 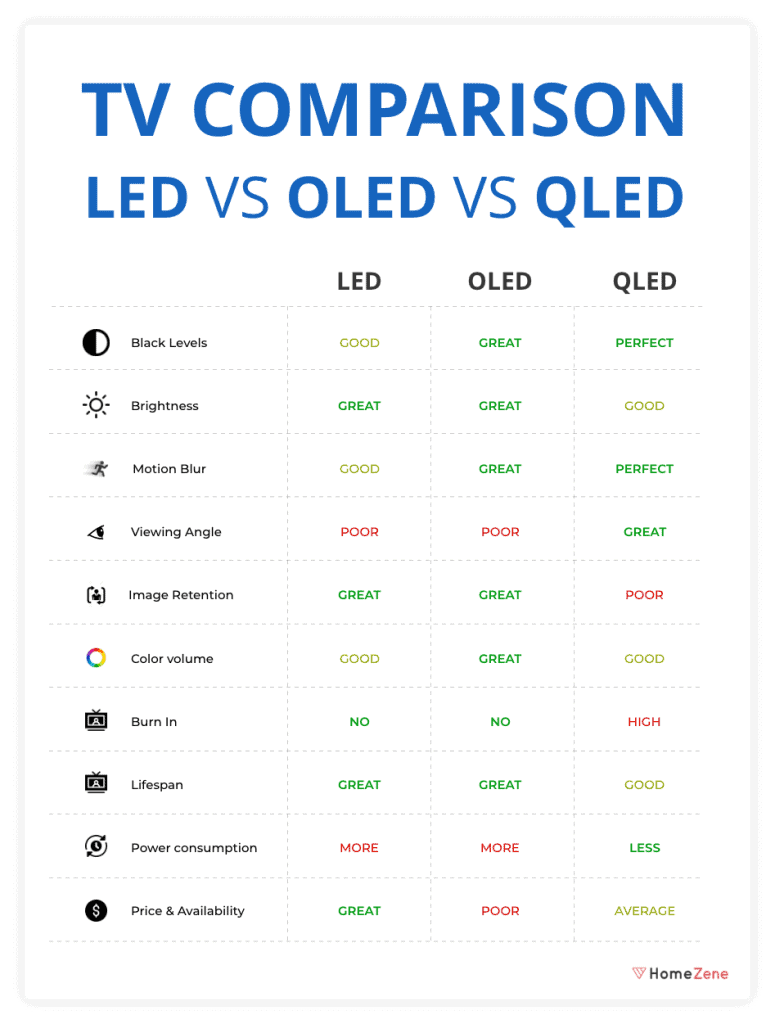 Now, let us provide in-depth description of each specification.

The most important aspect for excellent image quality is the capability to generate dark and deep blacks. Deep blacks provide higher contrast and rich colours next to it. This will provide clear, dazzling and realistic image. 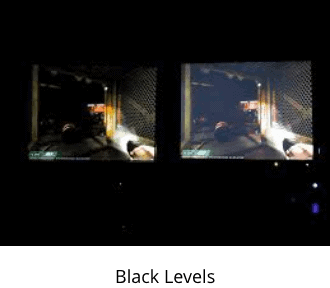 Usually, LED Tvs depend on backlights for shining behind a traditional LCD screen. Some models have been incorporated with advanced dimming technology which dims LEDs selectively that don’t have to be in a full blast. Actually, LED TVs have historically struggled for producing dark blacks and also suffered with light bleed (where lighter screen sections produce bloom or haze in darker areas).

When you consider black level factor, OLED is the winner. OLED don’t suffer from black-level issues like traditional LED TVs. If OLED pixel is not receiving any power, then it will not generate any light so it will be completely black.

So, LED is the right choice when it comes to black level. 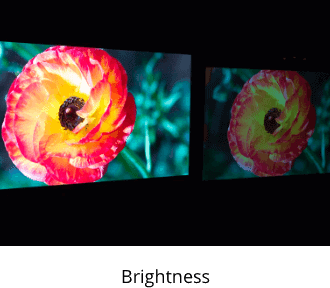 Both LEDs and QLEDs depend on backlight option for producing light. So, they both have same strengths and weakness. However, the brightness differs significantly from model to model. But OLEDs have same brightness level, regardless of model.

LED and QLEDs provide much brighter image than OLEDs. Because of power limitations, LED and QLED cannot maintain the same brightness peak with different content variations. To say in simple terms, LED/QLED TVs brighten some scenes extremely. But if the whole scene is bright, then it can decrease the brightness significantly.

Even OLED TVs experience the same issue and it is even more significant problem in HDR models. As OLED TVs are not as bright as LEDs, this issue even more noticeable. In some scenes, the brightness can decrease significantly from 900 cd/m2 to 150 cd.m2. This change is more significant and noticeable, so it can be a serious issue for some people.

When it comes to brightness feature, LED/QLED is the winner. 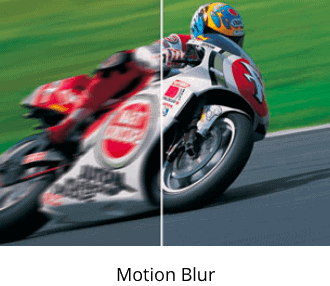 This factor represents the time taken for every individual pixel to change the state by colour and brightness as well. TV with quick response time will have less motion blur. As pixels in OLEDs have light source and colour in a single diode, the response time is much quicker. Contrast to it, LED TVs use LEDs for producing brightness and small LCD shutters for creating colour. The brightness of LEDs can change in an instant but LCD shutters cannot as they respond to changes very slowly.

OLED provides faster response time than other TV technologies, making it the champion.

Among three screen types, OLED is clearly the winner for the factor as well. In LED TVs, the best viewing angle is the centre. If you move to either side or further, the picture quality diminishes both in contrast as well as colour. And the severity of it varies from one model to another. And moreover, you can notice the difference quite clearly.

Samsung’s costliest QLED TV comes with latest panel design and anti-reflective coating which provides better off-angle viewing experience. However, OLED is still better than these models. But the brands are trying to resolve this issue.

With that being said, OLED TVs provide better luminance degradation even in drastic viewing angle (which is up to 84 degrees). When it comes to LED TVs, maximum viewing angle is 54 degrees.

So, clearly OLED is the best choice when it comes to viewing angle. 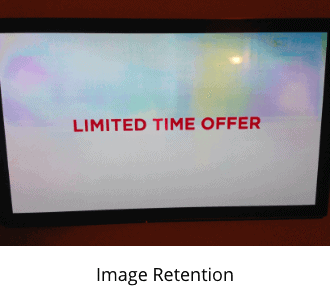 Just like older plasma sets, OLEDs can retain static images on the screen for few minutes. If same image is left on the screen for more than 5 to 10 minutes, then it leaves a faint version of it to the screen like a ghost. This will be more noticeable on uniform colours like grey. But it will fade away completely within few minutes.

Image retention differs from one TV to another, even if it is from the same model. There are several ways for avoiding these things and modern OLED TVs come with features that reduce it. LED TVs are not immune to image retention. However, they will not show any of it.

When it comes to image retention, LED and QLED is the best option, instead of OLED. 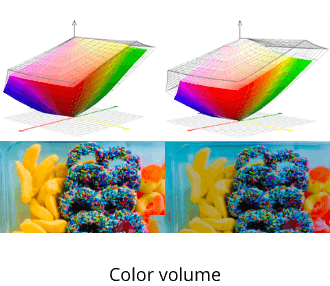 Compared to other TVs, QLED TVs came with biggest improvement in terms of colour performance. No other TVs in the market can match the colour volume and saturation levels present in the QLED TVs.

So, in terms of color gamut and color volume, QLED TVs are the best you can invest. 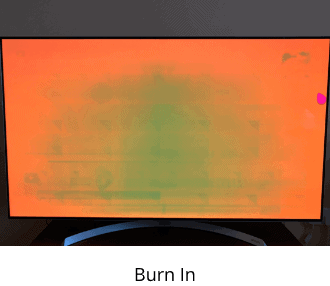 Image retention is temporary but burn-in is permanent. Well, for most of the people burn-in is not an issue. However, if you watch a lot of content with static elements with bright logos like ESPN, news channels, then burn-in can be an issue.

When display of static image stays for couple of minutes, it can lead to a burn-in image on the screen. This happens because the phosphorous (that coats TV screen) will glow for extended periods of time, wearing it out and creating burned-in image. This same applied to OLED TVs as well. If the pixel burns for long time, it will cause permanent dimming, creating a dark impression. But LEDs and QLEDs are not susceptible to burn-in.

With that being said, LED/QLED is the winner clearly in this comparison.

According to LG brand, you have to watch OLED TV for at least 54 days, 5 to 6 hours a day before its brightness decreases by 50%. Well, it is too soon to tell whether it is true claim or not as OLED TVs have been in the market only since 2013.

For this reason, we turn towards LED TVs as it has proven track record.

So, we affirm OLED as the best champion for this factor.

OLED TVs are the premium models as they are not available in budget or midrange tier. However, LED TVs come within budget, even if it has quality big screen. If you judge by the price alone, then LED TVs can be purchased for less amount in comparison to OLED TVs.

In this last factor, we declare the LED option as the winner.

Is QLED and OLED Similar? What is the Difference Between Them?

Even though, they have same acronyms (just one letter difference Q and O), these two models are not the same. OLED is based on the same technology as LED. However, it uses backlight layer that overlays self-emissive quantum dots on the pixels. This overlay will help with vividness, colour accuracy and brightness as well. If OLED is out of reach, then eventual deprecation like choose dot OLED or microLED as alternative option.

MicroLED has hit the markets in 2000’s. It is also referred as mLED or µLED which is a combination of OLED and LED features and none of their drawbacks. Sony was the first brand to demonstrate the prototype of mLED TV in the year 2012. However, the prototype didn’t make it production and never released commercially.

Since then, the Samsung brand has been working on providing 4K mLED TV to the market as The Wall mLED TV which is expected to be released soon.

As mLED TVs are not yet available commercially, it is difficult to know their performance. They are designed to provide peak brightness, wide colour gamut, wide viewing angles, perfect black level and no risk of burn-in. 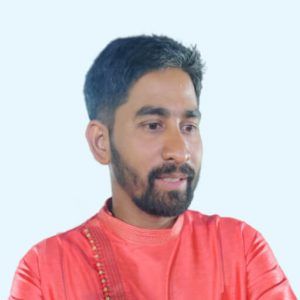