With a wide array of features, the humble TV provides, no doubt, that it has managed to create a huge market with various competitors eyeing for the customer’s attention. Gone are the days when we argued about flat screened TVs vs. its counterparts.

Now, discussions have moved onto which TV can give you the best connection to various OTT platforms along with the most visually appealing picture quality. With most televisions even offering 3D and VR aspects, many of us are still confused about the two most prevalent options, which is to choose between a smart TV or an Android one.

Before we jump into comparing the features of the two, let us understand what these two devices are all about.

What is a Smart TV?

Most of us have smartphones, and some of us are reading on it right now. If you look at the OS (operating software) of your phone, it is running either on an Android OS or iOS (Apple Inc.). 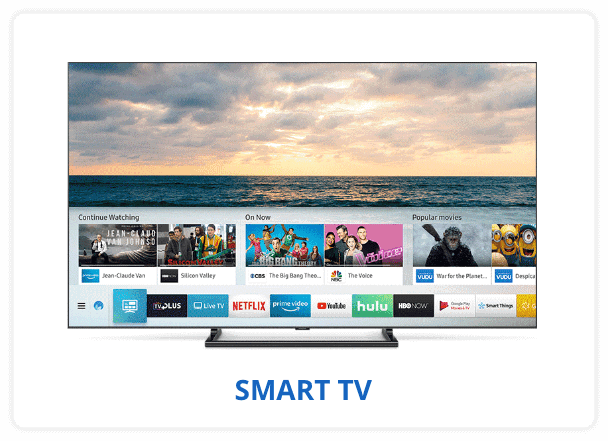 Your smartphone is nothing but a vessel for your OS software, without which you would only have calling and messaging capabilities and not be able to play any games or watch any on-demand streaming service.

This logic is quite similar when it comes to the TV, except that it has the company’s own signature OS (operating software). It merely comes with pre-installed applications, as well as the ability to browse the internet through your Wi-Fi connection or Ethernet cable.

Samsung started manufacturing the first Smart TV back in 2008 when we were still getting our heads and hands around smartphones. Since then, we have seen improvements by leaps and bounds. Though it is important to note that not all Smart TVs are created in the same capacity, each company will put its version of software into how it would like the TV to function.

What is Android TV?

Android TV’s were first introduced in 2015 by Sony in partnership with Google. 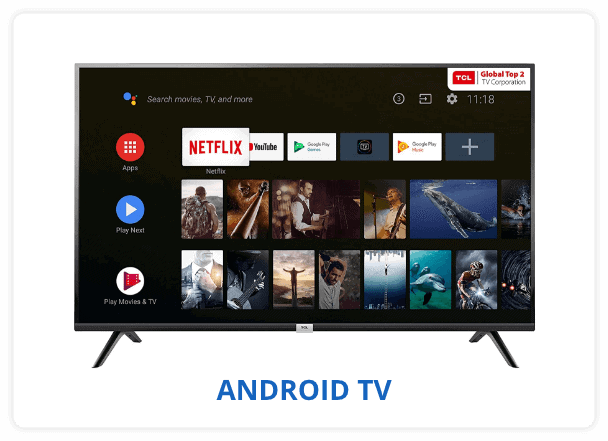 Unlike a Smart TV that only relies on pre-installed apps and does not have the bandwidth to add many additional ones, an Android TV can access the Google Play Store and Google Assistant, giving you a plethora of options. Since Smart TV manufacturers who are not under the Android banner use their own set of applications and software, TV’s made with the Android OS have to adhere to its specific rules and functions.

However, it is imperative to note that without introducing Smart TV, the Android TV might have taken a few more years to develop.

Now, one might think, isn’t it an easy choice to get an Android TV since it is a Smart TV as well? This isn’t exactly easy to decide as both come with their own sets of pros and cons.

So, before we make up our minds, let us look at the different features each has to offer as it’s not only the number of apps we can hoard which will make our TV a better one. 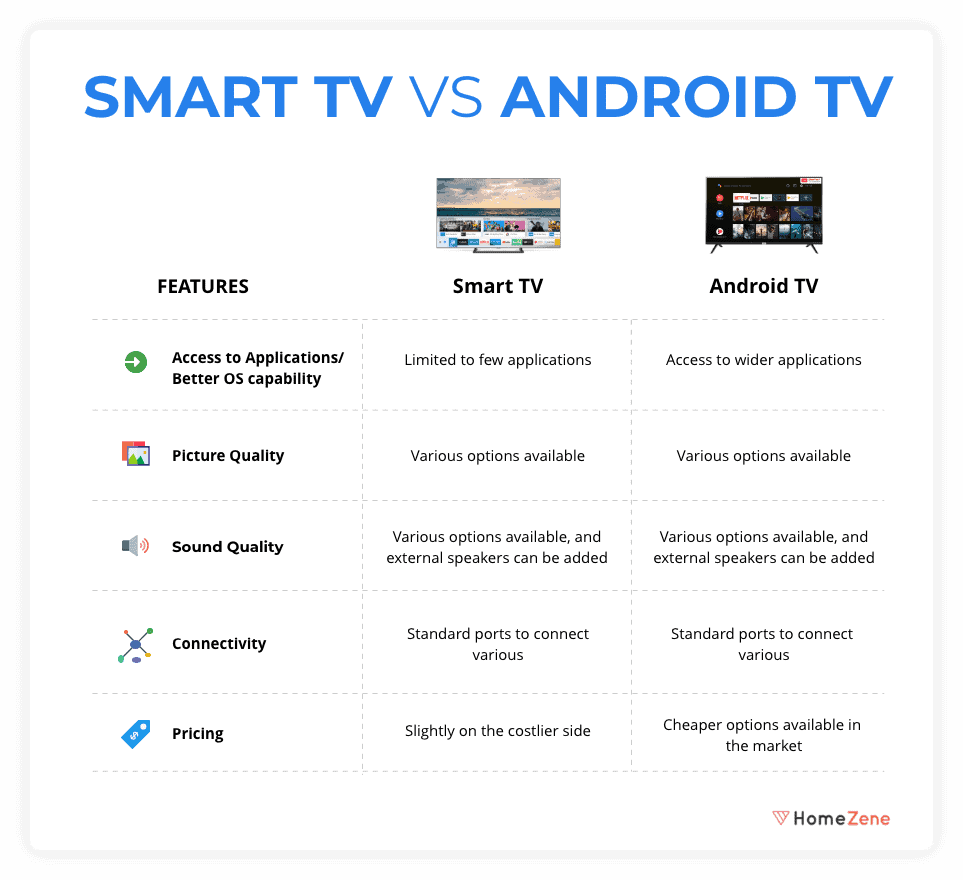 Features of a Smart TV:

To take complete advantage of a Smart TV, you need to have good Wi-Fi or internet connection. This will allow you to access the World Wide Web wherein you can browse different websites, open your email, play games that are pre-installed or supported by the browser extension.

Along with this, most TV’s also come with OTT platforms such as Netflix, Amazon Prime Video, YouTube, Disney Hotstar, to name a few.

Another feature is the ability to cast your laptop or phone’s screen and play videos, pictures, etc. Some TV’s also provides the ability to speak into your remote for you to give commands to operate it.

Features of an Android TV:

Much like a Smart TV, the Android version also gives you access to various apps, but you are not limited to only the specific TV manufacturing company’s apps. As mentioned before, one can enjoy most of Google play store’s apps, including their games.

At the same time, it also gives you the ability to browse Google’s search engine, the assistance of Google voice, and other generic features such as screen-sharing and universal search.

Apart from this, it also gives you recommendations based on your viewing, search history, also known as curated content, which you will not find in a Smart TV.

However, one has to beware as some Android TVs on the cheaper side have been known to provide apps compatible with mobile phones rather than for televisions specifically.

Even if we have access to a hundred different apps, if the picture quality is not up to standard, then the viewing experience will not be satisfactory. Hence, picture quality should also be given priority while choosing a TV. 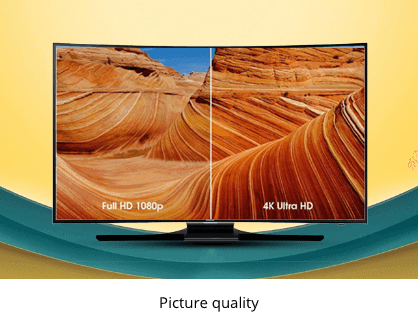 When it comes to crisp and clear picture and the ability to watch movies and TV shows in heightened colors, the best TV, according to popular opinion, is a Smart TV manufactured by Samsung, Sony, and LG, etc..

Though, even Android TVs that have come new into the market, such as OnePlus, Mi are proving to be tough competitors when it comes to screen quality aspects and viewing pleasure. Hence, most of the picture quality options which you will receive in a Smart TV will be available in an Android variant as well.

So, in terms of trying to choose between 4k, 8k, LED, OLED, QLED, you will have these in both the devices.

Great picture quality needs to be accompanied by equally good sound quality. They should be able to suit the different types of entertainment or gaming options and not be restricted. Many TVs now offer the option to switch from movie mode to sports mode and even to music mode. 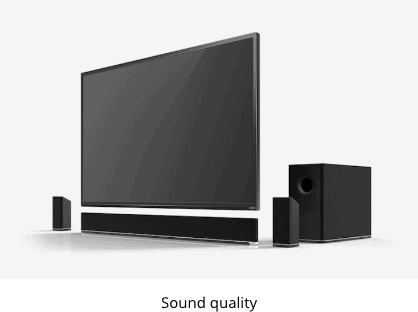 Through AI or voice recognition, many devices allow you to do this in a matter of seconds. Again, like picture quality is not restricted to only a particular type of TV, sound quality falls into the same basket.

Both variants of TV sets also provide the option to connect to various sound boxes and bars through their USB ports or wirelessly. When it comes to sound, there is no difference in either of them. It would depend more on the specs of the TV and the price you are paying.

Most TV’s come equipped with 3 HDMI ports via which you can connect your set-top box, Ethernet cable, gaming console, or any high-speed HDMI cable. 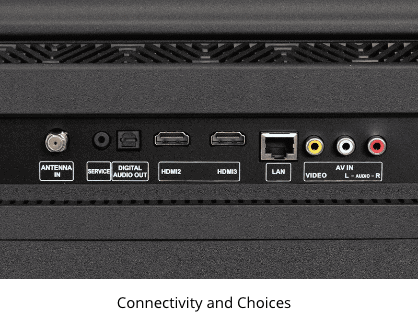 Apart from this, it also houses a minimum of 1 USB port from which you can access your pen drive and an aux cable port or a headphone jack, which you can use if you want to upgrade the sound on your TV.

These features are present in both the Android as well as the Smart TV version, and you will rarely find any differences in the two.

The only extra connectivity option which the Android TV gets is Google’s Chromecast and Google Assistant, which allows you to cast the content on your smartphone onto the TV effortlessly.

Android TV’s are known to be more pocket-friendly as companies do not need to build on their own OS to run their TV’s. Whereas, Smart TV’s like that of Samsung and LG can prove to be costlier. 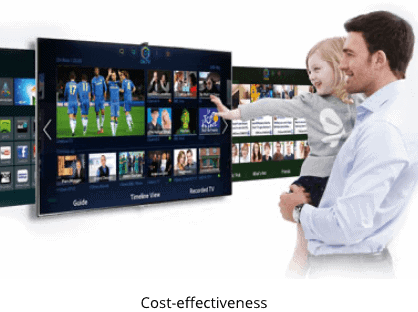 Though, if critically analyzed, costs usually vary depending on the size of the TV and the various specifications and size chosen.

Final Verdict, Which One To Choose?

Android TV in simple terms, is nothing but a category of Smart TVs, which functions a bit differently and is not free of cons.

For a new user, it might be confusing to get used to the interface of it’s OS, whereas Smart TVs are quite straightforward and easier to understand and use.

Android TVs being newer in the market, also have fewer manufacturers, thus, reducing the quality of the competition and, in turn, the choices in devices as compared to its counterpart.

It is hard to decide which is a better variant of TV, as it mainly depends on the manufacturer and what the customer is looking for.

And the fact that Android TV has merely followed in the footsteps of the Smart TV, we can still conclude that if one is looking for a TV which can also turn into a semi-computer, then the best option would be an Android set.

This would also mean you get a variety of features/applications for the same cost as a generic Smart TV and the ability to use it for a longer period of time with the availability of constant updates.